You may not know this, but I don't do the whole "swap" thing.  It brings out all my insecurities about making things that will fall apart and be disappointing to others. Also, I'm terrible at time management and know that I will miss deadlines and then some poor person will be sitting by their mail box, wishing and hoping and praying, and their gift never ever arrives... Doesn't that make you want to have me in your swap group!!!

Well, I decided that it was time to suck it up and put myself out there - give it a go and see what I could do.  I signed up for the Perfectly Pretty Hoop Swap with A Crafty Fox and crossed my fingers that it'd all work out ok.

I got assigned a partner, and thankfully she was also from Australia, becasue I had visions of trying to ship something internationally in the weeks leading up to Christmas #nightmare.  She told me that she loved the colour blue and wanted a pocket hoop, and gave me a link to her pinterest board which was chock full of super cute hoops.  I also took the opportunity to stalk the rest of her boards a little to see if I could get a feel for her.

She seemed to really like the calico type fabric with colour, so I headed out to the local Spotlight (#timewarpzone) and did me some shopping.  And this is where I had my first little panic - what size hoop do you swap??? There were no rules when I signed up... There's no guidance... I can't make these kind of decisions!! What do I do????? 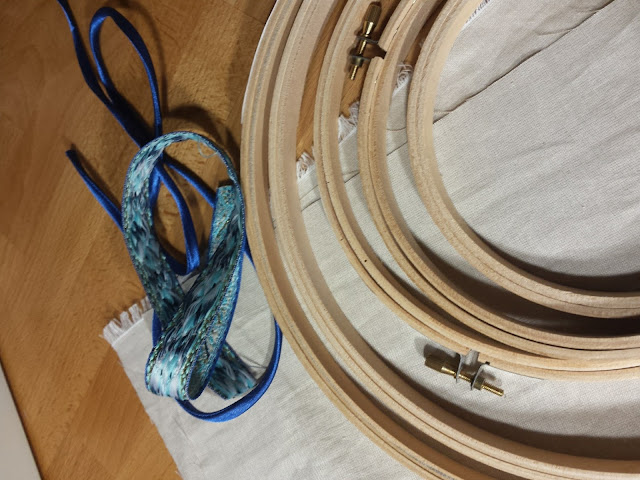 That's simple - buy all the hoops!

I ended up going with the largest one I bought, just becasue I was making pockets, so I felt a nice big space would work best.  I had a little plan about what to do, and so I cut and I folded and I made it way more complicated than it needed to be, but eventually I got it made.  And it was a little boring.  So I pulled out my random stash of embroidery floss and added some gold to bling it up - because who doesn't keep gold floss in their house?? What are you? An animal??

The rules for the swap were to keep any extras under $5, but I'd bought all these hoops, and had some leftover fabric, so I quickly chopped out another circle and put that pinterest stalking to good use and stitched up one of the quotes that my partner had pinned. It felt like something that might belong in a sewing room - a little reminder that we are making things that are beautiful and even when it doesn't seem like it right now to just trust the instincts and the beauty will come. 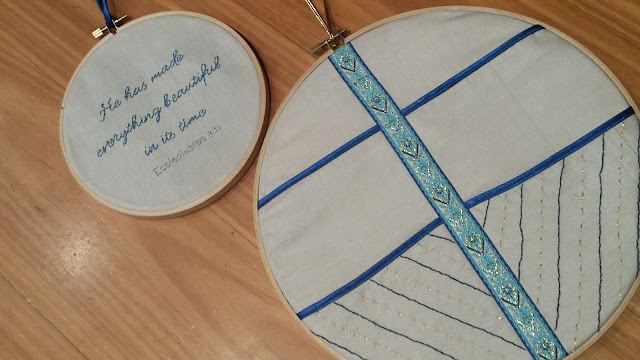 I stumbled upon this tutorial for backing the hoops, and voila! I was done. (In all honesty, I feel I have to admit that I had intended to glue felt on the back, but my house is a disaster and I lost my hot glue gun, so had to come up with an alternative.)

They're not super fancy, in fact, they're quite simple, but I like that.  Elegant, and minimal.  Now I only hope my swap partner likes them.

I also snuck in a packet of Skittles, just because I think it's a law that swaps need sweets, and I wasn't going to put chocolate anywhere near the package in the Aussie summer - felt that might be a recipe for disaster.

So there we go. My first ever swap, and I don't think I embarrassed my self, which was my only goal.