Having dipped my toe with my blue feathers, I was ready to make a million trillion feathers.  Seriously, I am prepared for every quilt I ever make forever more to have feathers in it.

It seems like every person I know is currently expecting a little girl, so I thought a baby quilt with pink feathers could be cute.

Because I knew I was making more, and because one of the ladies in the BrisMQG generously lent me her feather templates, I went a bit more of a production line with this one. I made strips for the feathery side of the feathers and did much of my cutting and assembling, well assembly line style.

The biggest problem I had was that I ran out of grey when I was only halfway through adding sides to my feathers. It’s Kona Medium Grey, so not a rare or valuable fabric, but, as always, it took me time to get around to ordering more (and then because I’m in Australia and ordering from the US, it takes even longer). 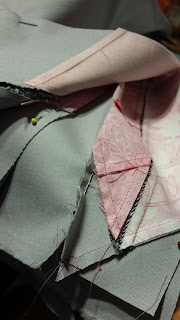 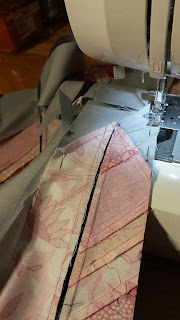 And then once they were all finally properly pieced, I forgot what layout I had assigned them to :-/  You see, they had been up on my wall and I had been totally happy with it, but then I had other things to sew, so I took them down and they got mixed up and it was all everywhere… I know #firstworldproblems right here.

And now that they had their sides on them, they seemed bigger than they had before. My original intention was to do 6” strips in between columns with 1 feather free floating up above, but when I laid them all out that way, it took up half my lounge room. And it didn’t feel balanced. 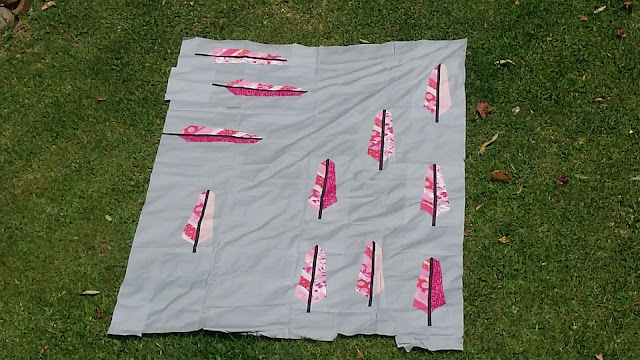 I rearranged and sewed and rearranged and sewed. And rearranged and sewed some more. I finally had something that I felt was almost maybe right. It’s still got the same 2 direction thing going, but the groupings have changed, and that odd duck in the bottom left is more adrift than originally intended (although not as wonky as he was going to be – turns out I should have totally ordered more of that grey if I wanted to use it up with fancy angles).

I think that quilting this will really help it to sing.  The grey feels a little flat when there’s this much of it (although I love the pink against the grey – it makes me happy). 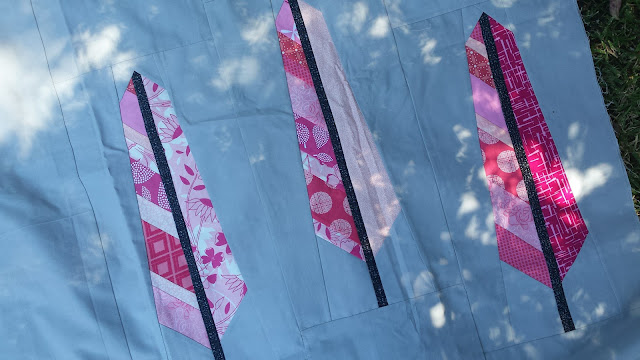 And even though I made these in a batch, each one is unique and different and has different fabrics.

I am calling it a Flock of Pink Seagulls - because feathers everywhere means it’s a flock of birds, and the phrase “flock of seagulls” kept going around in my head (possibly the result of listening to too much bad 80’s music as a child), but seagulls are white and these feathers are pink – it has been suggested that Flock of Flamingos or Flock of Galahs would be more appropriate, but it’s too late. Flock of Pink Seagulls is stuck in my head!)

I don’t think I’m done with feathers yet.  Hopefully Kim doesn’t mind that I am holding her templates hostage for a little while longer.  I have 2 more feather-y quilts in my head that I might try to bring to life if I can.

As far as this baby, it's been tucked into the cupboard of shame, along with all my other completed tops that I am too scared to attempt to quilt. Because it turns out, I'm bad at making baby quilts because they end up growing and growing, and being far, far too big for babies, so this is no longer a gift.  I think there's so much negative space, the quilting on this could be incredible, but I am just not confident I can do it justice myself.  And I know the only way to improv my FMQ is to practice... but maybe not yet.